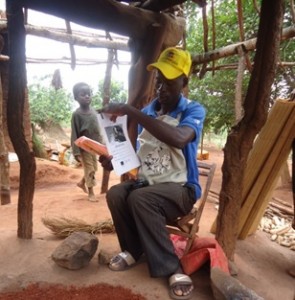 Alegria received a bicycle with a maintenance kit, to assist in the vaccination work.

Alegria João Manisse is a community vaccinator in Nhamuenga village, Mozambique. He always raised chickens, but with outbreaks of Newcastle disease arriving and wiping out the entire flock regularly, he could never really increase his chicken numbers. In June 2014 he was one of the selected people in the community to be trained as a community vaccinator. After the training he a received bicycle with a maintenance kit, to assist in the vaccination work. So far he has implemented three vaccination campaigns. In the first vaccination campaign he vaccinated 203 chickens and received 203 meticais (mts), in November he vaccinated 1,219 chickens and received 1.219,00 mts and in March 2015, he vaccinated 2,370 chickens and received 1.918,00 mts. With the money that he received for vaccinating chickens, he replaced two tyres for his bike; he bought some fish for home consumption, some medicines and opened a bank account. He says that the money is not a lot, but it helps with these small expenses.