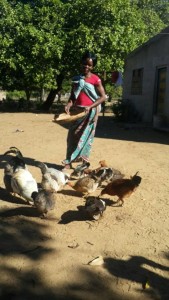 “The chicks no longer died with signs of Muzungo and the flock size was increasing”.

Like most smallholder farmers in Manjacaze district, Jacqueline Bucuane owns chickens. When she heard about the vaccination program in her village in 2011, she had only 3 chickens but when the vaccinator came into her house, he explained the benefits of the vaccination program for the control of Muzungo (Newcastle disease).  As she kept on loosing chickens due to the disease, she decided to vaccinate. After 2 vaccination campaigns she could see some changes in her flock. The chicks no longer died with signs of Muzungo and the flock size was increasing. The chickens including the chicks were no longer dying. Since than she has been vaccinating regularly.