In reading a wonderful memoire by a Pygmy refugee in Australia titled “Still a Pygmy”, we learnt that even in the far corners of the Democratic Republic of the Congo (DRC), people know about Newcastle disease and the need to vaccinate their chickens against it. Isaac Bacirongo, the author and subject of the book, notes that prior to leaving the DRC as a refugee, to earn money he kept chickens. He writes:

“I started farming ducks and chickens because I knew they would reproduce quickly and I could sell them for meat. In Congo, ducks and chickens don’t take much work because we don’t feed them like you do in Australia, They feed themselves in the streets and in the fields, and come home in the evening. All I had to do was vaccinate them against what we call ‘shotoka’in Swahili, which is the disease that can spread throughout all the villages, causing everyone’s chickens to suddenly get sick and die. By the end of the year I had about one hundred chickens.

We were selling vegetables and getting money, selling medicines, selling chickens, and I was eating chicken every day. I was prosperous!”

In many African countries, the biggest issue is availability of effective vaccine against Newcastle disease. For Isaac, he used to buy vaccine for his chickens from a farm chemist in Bukavu, the town he lived in. Later, he noticed that the vaccine was not working so well and discovered that most were fake so he went back to the traditional medicine – a little dose of “Muhalaba/Mutuzo” (a tree herb) but only very few of his chickens survived. KYEEMA Foundation has been working in several African countries to set up sustainable supply chains for Newcastle disease vaccine, so that situations like this do not occur.

Isaac now lives in the suburbs of Sydney and still dreams of having a flock of village chickens! 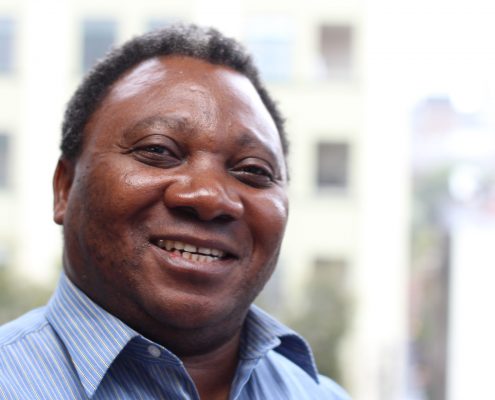 The book has been co-written by Michael Nest, an Australian author with a PhD in African politics. If you would like to read the book, it can be found at: https://www.amazon.com.au/Still-Pygmy-Isaac-Bacirongo-ebook/dp/B00TEY6ICM.

Meet our volunteer in Fiji

What could you do with $5 this Christmas?
Scroll to top