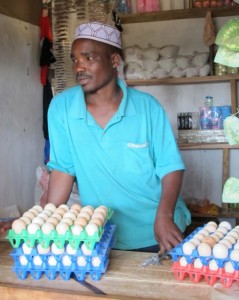 Madai is from Unjangwe village in Singida, Tanzania. Around 10 years ago he began to keep poultry, but generally kept only a few birds since they would inevitably die of Newcastle disease (ND) around September or October every year. Before the project started, vaccination against ND was haphazard and there was really nothing that could be done to control ND. When the system of organised vaccination campaigns and community vaccinators was introduced, he was among the first to accept it and has seen the benefits.

None of Madai’s birds have died of ND since the project started and his flock has grown considerably. A major part of his income is from egg sales; generally he sells no fewer than 30 eggs per day!

Madai is a progressive farmer and received training on improved poultry husbandry from the project, together with the Community vaccinators. The training included preparing supplementary feed for the chickens, based on locally available ingredients such as bulrush millet, a major crop in the area. Mostly Madai’s chickens scavenge for their food, but he provides some supplementary feed prepared according to project training and also ‘grows’ termites to feed his birds.  Madai sells eggs from his small village shop.

Together with his neighbours, he has formed a cooperative group that all raise birds and produce eggs. The group is well organised with a Chairperson, Secretary and Treasurer.

One of the benefits of being in a group is that buyers are attracted to the village to buy eggs (used mainly for hatching) and the group get a better price for their eggs. They normally also sell a lot of chickens, but are now organising for sales in December when the price is high due to festivals.

Madai and his neighbours are extremely thankful for the project – they remember the effects of ND from before the project and now realise the great benefits of vaccination. With vaccination, they are assured that the birds will survive and can now decide when to sell “We sell chickens and eggs when we want to!”

Read more about our work in Tanzania.