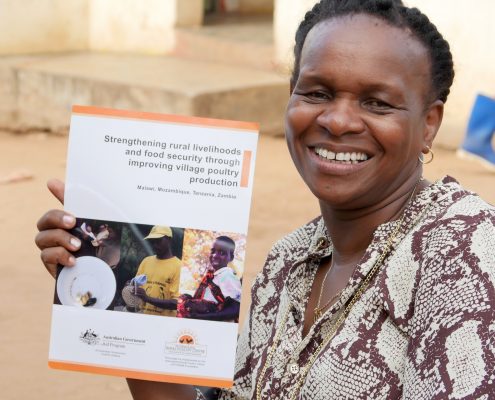 KYEEMA Foundation’s Dr Rosa Costa was invited to give a keynote address on small-scale poultry production at the 19th World Veterinary Poultry Congress in Cape Town, South Africa in September 2015. The event was well-attended by scientists, researchers and veterinarians from the African continent and across the globe.

Rosa spoke to delegates about the importance of interventions to improve production in small-scale poultry farms. Interventions that focus on health, such as Newcastle disease vaccinations and anti-parasitic treatments appear to be the most successful. Vaccinating backyard chickens in Africa against Newcastle disease reduces mortalities by up to 80 per cent, with a single intervention having shown to have a mean return on investment of US$6.32 (Klos R. et al.,2006)*. Other interventions include promoting appropriate housing using locally available materials, feeding strategies for different age groups and breeding strategies to improve the genetic potential of the flock.

Other topics by invited speakers included the ever increasing role of veterinarians as ‘protectors of animals’ and educators to the public about the challenges of production animals in the face of increased sympathy for animal welfare. Also, the new challenges for diseases such as Infectious Bronchitis in which new strains are presenting differently and becoming a problem in vaccinated flocks. Speakers from Europe, USA and China updated delegates on coordinated Avian Influenza (AI) response and control in light of recent experiences. A South African representative reminded the participants that while AI is a big threat to much of the world, Newcastle disease is still the major concern for the African continent. It was emphasized that South Africa could achieve disease free status if biosecurity was improved.

The 20th World Poultry Congress will be held in Beijing, China on the 5-9th September 2016. We hope that KYEEMA Foundation will be able to have representatives in attendance again to promote the value of family poultry on the world stage.

*R. KLOS, C. EISELE, T. BENNETT, G. FRANK, B. GOODGER, 2006. USE OF A STANDARDIZED FORM FOR PARTIAL BUDGET ANALYSES TO ASSESS THE FEASIBILITY AND EFFICIENCY OF INTERVENTIONS IN FAMILY POULTRY OPERATIONS IN 11 AFRICAN COUNTRIES. In Proceedings of a final research coordination meeting organized by the Joint FAO/IAEA Division of Nuclear Techniques in Food and Agriculture and held in Vienna, 24–28 May 2004

KYEEMA Foundation at the DFAT round table
Scroll to top