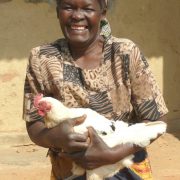 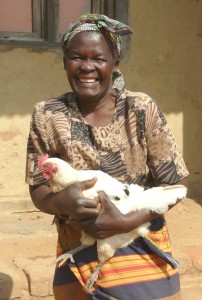 Judith lives in the village of Chipasula in the hilly and picturesque Ntchisi district of Malawi. She has six children from ten to twenty years of age. She and her husband are very proud of their progress in raising village poultry – what we would call ‘backyard chickens’. Judith told us about her experiences since KYEEMA started the GRM Communities 1st project in her village.

Before the project started, people used to lose a lot of chickens to Newcastle disease. They tried various remedies but none was particularly effective. The disease came once or twice every year and wiped out most if not all of the chickens. Then the National Rural Poultry Centre in Malawi trained a community based vaccinator, Anna Ching’ombe, and a program of vaccination was commenced at Chipasula and surrounding villages. We only learned later that Anna was in fact Judith’s daughter! Judith was surprised at the effectiveness of this program and became one of its strong proponents. She told us that she now produces many more chickens because there are much fewer deaths. She now has about 21 chickens of various ages. She eats chicken meat much more frequently than she used to and sells many more chickens these days. Her husband told us that he estimated the total number of chickens eaten or sold in their household was now more than double what it was before the vaccination program began. We had no means of firm verification but from what we know of the disease, this estimate is quite plausible.

Want to join the discussion?
Feel free to contribute!